Last Saturday morning, I went to Heathrow to pick up my boyfriend, Ethan, from the airport. I was incredibly excited to see him as it had been just over three months since I had last seen him, but I was also excited to show him the wonderful city I currently call home, London.

Since arriving in London in January, I have primarily been living life in London as someone who both works and studies here. Personally, I have not felt like a tourist here, someone who is only here for a few days to a week, frantically trying to see all the main attractions and sights. Instead, I’ve found myself seeking out different boroughs in London to explore in order to get a full taste of the area, rather than specific attractions. Because of this, I was actually quite excited to “be a tourist for the week” as I haven’t visited many of the main sites London is famous for.

While Ethan was here, I attempted to balance showing him some of the unique, pretty and eclectic boroughs I have visited and enjoyed with the well-known sites of London such as Big Ben, the London Eye, Tower Bridge, Buckingham Palace and so on.

The same day that he landed, I was able to combine these two ideas as we headed to Borough Market first thing. Borough Market is on the South Bank of the Thames River and is best known for its diverse food options ranging from fresh fruits and vegetables to delicious pastries and full cooked meals from different parts of the world. Being that it was a Saturday morning, it was quite busy, so I was throwing Ethan into the hustle and bustle of London as he had just gotten off an eight hour plane ride. After walking through Borough Market and sampling some delicious pastries, we headed across Tower Bridge and then past the Tower of London which was also really busy. 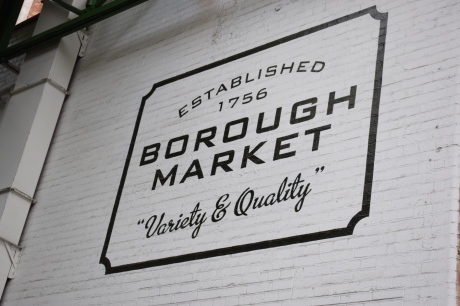 As if I hadn’t overwhelmed Ethan enough, I took him to a Fulham vs Wolverhampton football match in the afternoon. It was the first football (soccer) match I had been to while in London and the atmosphere was absolutely amazing. While we couldn’t understand any of the cheers, we shouted along anyways. Our seats were between the corner flag and the goal and only about six rows back, aka fantastic seats. 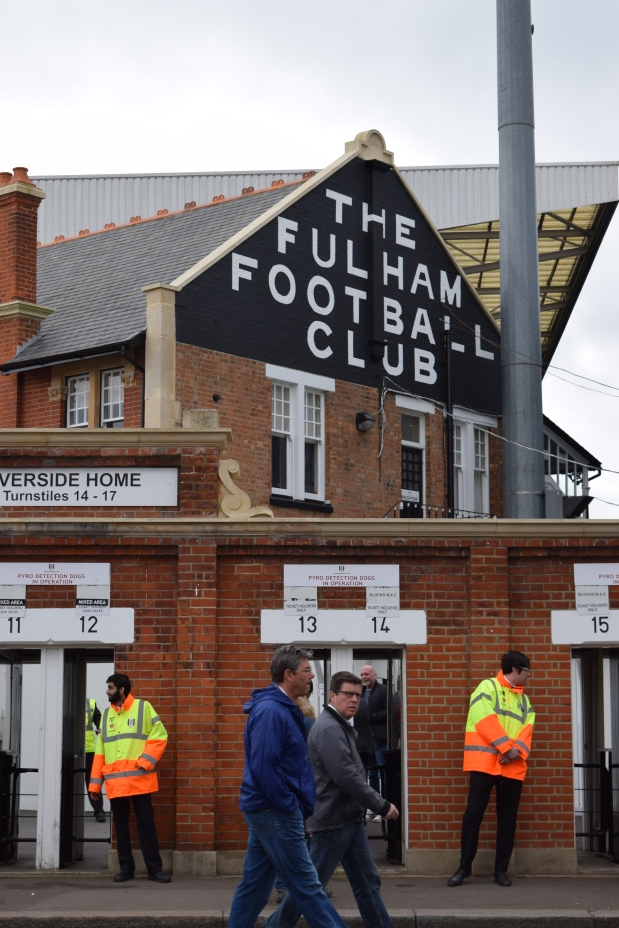 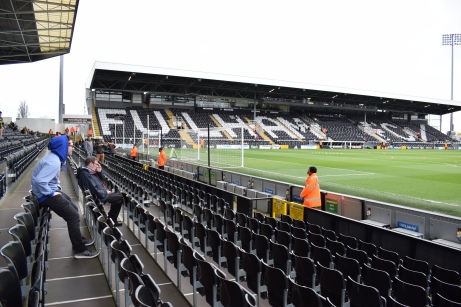 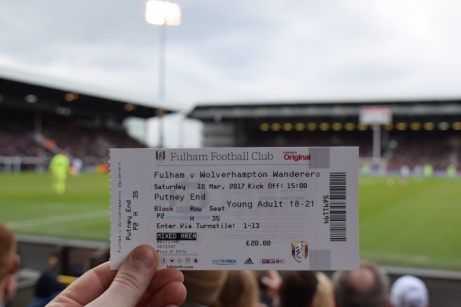 On Sunday, we took a train out to Cambridge for a day trip. While I had previously been to Oxford, I was more excited to go to Cambridge and just have a relaxing day walking around looking at the pretty old school buildings. We wandered through the main part of town and then went towards the river to watch the punters (the people on the gondola-esque boats with the long poles). We had brunch at a really  cute restaurant and then spent the rest of the day walking around. 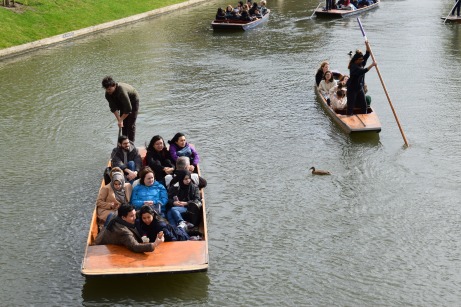 Ethan’s birthday is in early April, and  as I will not be home for it, I decided to surprise him by getting tickets to a West End show while he was here. His favorite childhood Disney movie was Aladdin, and they just so happen to have Aladdin playing at the Prince Edward Theatre, so I bought tickets for us to go on Monday night. He absolutely loved the show and I was very happy with how surprised he was when we turned the corner and he saw the Aladdin sign over the theatre entrance!

On Tuesday, we took the classic tourist route. First, we stopped at Buckingham Palace, then walked through St. Jame’s Park and then walked through Westminster. In Westminster, we first stopped outside Westminster Abbey and then Westminster Palace to look at the Houses of Parliament and Big Ben. We then made our way over Westminster Bridge to get a different view of Big Ben, then went back across to continue walking down Whitehall Street, stopping at 10 Downing Street where the Prime Minister lives, the Horse Guards Parade and finally, we ended at Trafalgar Square. The National Gallery overlooks Trafalgar Square, so we went inside and wandered around a bit before making the walk east to St. Paul’s Cathedral with our final destination being the Sky Garden.

The Sky Garden is one of the few skyscrapers in London and is uniquely shaped, some call it the walkie talkie. It is best known for its top-floor viewing deck and restaurant that boasts a large indoor green garden. It is quite difficult to get tickets to go up to the top, despite the tickets being free. They sell out weeks in advance. Luckily, I had been watching the website and was able to book two tickets for us at 4:45 p.m. so we were able to see all of London in both the daytime and as the sun was setting. If you ever come to London and are looking for a fantastic view of London and don’t want to spend money to go up in the London Eye, I highly suggest getting tickets to go up to the Sky Garden! (Its the cheaper and better version of its skyscraper neighbor the Shard.) 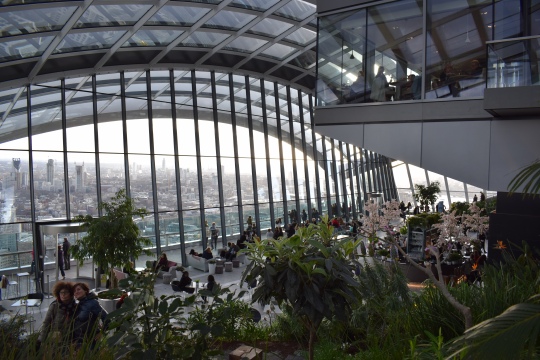 Throughout the rest of the week, I was able to take Ethan to see the area where I work, in the borough of Shoreditch. I work on Brick Lane, which is known for its Indian Food, the Spitalfields Market and street art. While I wasn’t able to show him around most of the day, we still managed to see the market and some street art. On Thursday after I got out of my internship, we took the tube to Camden town where we wandered through Camden Market. Personally, I’m not the biggest fan of Camden, it is quite different from the rest of London. There is more of a hipster and goth influence and is usually quite busy. Ethan had similar feelings about the area, so we didn’t spend much time here and ended up walking to Regents Park and Primrose Hill where we were able to watch the sunset. Primrose Hill also has amazing views of the London skyline and is well worth the climb to the top of the hill.

Saturday morning, we got up bright and early to make it to Portobello Market in Notting Hill. Of all the markets in London that I have been to, Portobello Market tops my list and it ended up being one of Ethan’s favorite places in London as well. We slowly made our way through the crowds of people as we walked down the street. We stopped to get donuts from a street vendor, and they ended up being the best apple and jam (not jelly, that’s not a thing here!) filled donuts we had ever had. Highly suggest! When looking for nice and cheap souvenirs in London, I also suggest going to Portobello Street Market as they have many permanent shops that sell sweatshirts, mugs, t-shirts, etc. and for good prices! After Notting Hill, we made our way back to Westminster and across to the area by the London Eye. We were going to do the London Eye, but had not made reservations and sadly they had sold out for the day. Instead, we decided to do a boat tour of London that actually ended up being really pretty. It was also such a nice day out and I swear I got sunburned as we sat on the top deck of the boat! 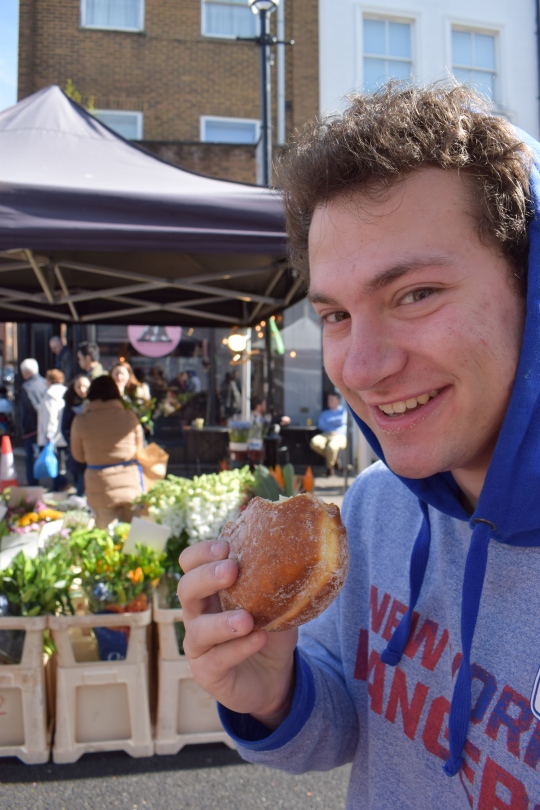 The next morning, Sunday, Ethan and I took the tube back out to Heathrow where he was flying out of. We had such a full, fun week and I still cannot believe how much we were able to fit in, despite the fact that I was still in classes and an internship on the weekdays!

2 thoughts on “Finally, a tourist in London”