Last Saturday, all of the UW-Madison students went on a trip I had been looking forward to since the beginning of the semester: Brighton.

Brighton is directly south of London and is an English seaside resort town. It is also known for its nightlife, shopping and festivals. We took a coach bus from London to Brighton and got there in about an hour and fifteen minutes. The bus dropped us right in front of the PEBBLE beach and Brighton Pier. From there, our tour guide took us on an hour-long walking tour of Brighton.

On the walking tour, we mainly walked through the shopping and restaurant district in the main part of downtown Brighton. There were tons of people out shopping as it was a Saturday morning. There were the classic chain stores like Gap and H&M, but the smaller, more local shops outnumbered these big box stores. Apart from these local stores, there are also many local restaurants in Brighton. Many of these restaurants happen to be vegan and vegetarian, not something that is quite as common in London. 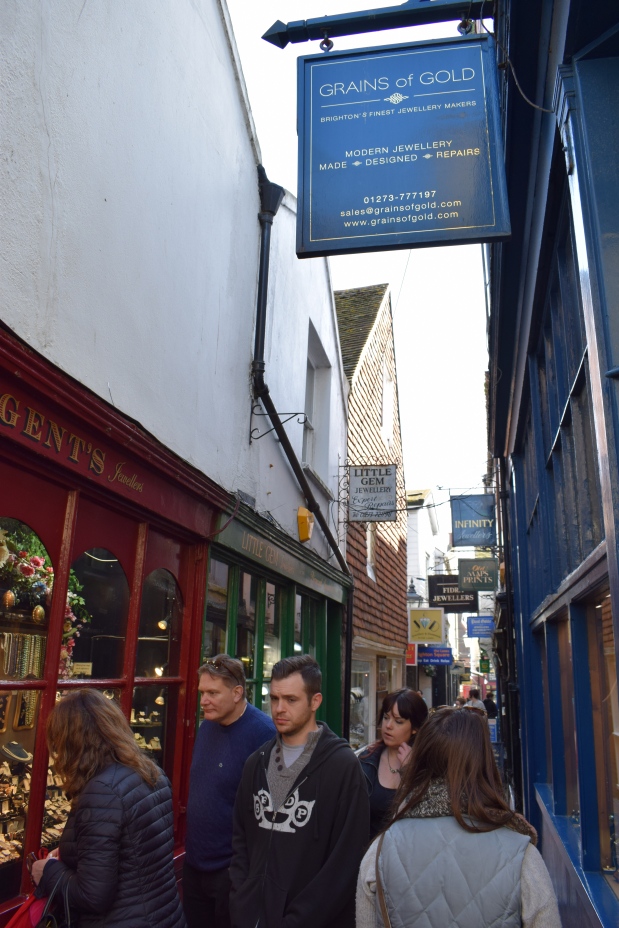 After walking through the shopping district, we made a stop at the Royal Pavilion, also known as the Brighton Pavilion. It was built as a seaside retreat for George, Prince of Wales, in 1811. This building looks as though it should be placed somewhere in India, rather than on the English seaside coast. I guess it just adds to the quirks of Brighton.

We were then free to explore on our own until we had to meet the bus to go back to London at 4 p.m. We had spent most of our time further inland where the shops were, and headed directly for the beach and water.

Normally, I am not a fan of resort towns and beaches. I hate beaches. Brighton is different though. It doesn’t have a normal beach, it has a pebble beach. Its fantastic.

After lunch, I spent a lot of time on the beach taking photos with a few friends (probably the most time I have ever spent on a beach if I’m being honest). We had so much fun throwing pebbles around and a few people almost got caught by some of the waves coming in.

Post photo shoot, we headed up the stairs to walk along Brighton Pier. The pier is totally commercialized for tourists as it boasts stands selling 99 Flake ice cream cones (usually for 2.50 instead of 99 p…typical), carnival games and rides. The rides are at the end of the pier where there are typical rides similar to the Tilt-A-Whirl and Scrambler, but there are even two small-sized roller coasters. Its quite an interesting set-up.

We still had a few hours left and were yet to find the famous colorful beach huts of Brighton. From the pier, we weren’t able to see any sign of them, so we ended up asking a girl working one of the stands which direction we needed to walk in to find the beach huts. The beach huts are west of Brighton Pier, so we walked along the pavement near the beach. This path is lined with water-front restaurants, bars and shops. Being a Saturday, it was incredibly packed but began to thin out the further we got from Brighton Pier. 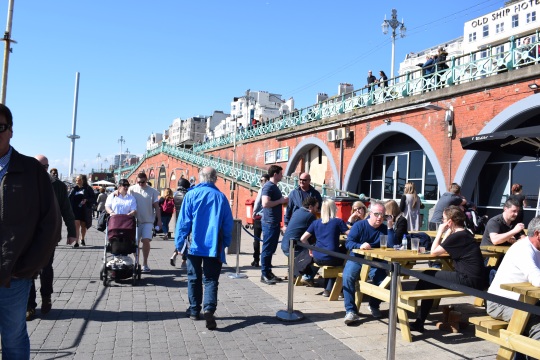 Eventually, after about a 25 minute walk from Brighton Pier, we spotted the beach huts. These beach huts are used by locals in the summer to keep food in, change clothes and just hang out in. They are pretty small but do the trick. It was a beautiful day out, and while still early spring, there were a few owners sitting inside reading a newspaper in their beach hut with the doors open. Quite cute.

It was then time to head back so we could catch the bus home. Along the way, we stopped to get a 99 Flake ice cream (for two pounds), and made it back with plenty of time to spare. If I had more time here in the UK, I would definitely make another trip down to Brighton to explore for a longer period of time. It is such a cool city and we barely scratched the surface of what it has to offer as we had a limited six hours there. Until next time!