Yes. I’m devoting an entire blog post to this day. Would you expect anything less from me?

On Tuesday, I did something I’ve been trying to do for over seven years: meet Ed Sheeran.

I woke up at 6 a.m. and was to the BBC Broadcasting House by 7:30 a.m. And NO MOM, I was not the first person there! I swear. I sat on the ground at the corner of the barrier that stood outside of the BBC Radio 1 studios.

After sitting on the cold, hard ground for just over two hours, it was time to stand up. Ed’s manager Stuart Camp, his guitar technician Trevor Dawkins, and the rest of his small team had arrived. Ed was not far behind.

At 9:52, a van pulled up and he got out. At first I was unsure if he would even stop to say hi to all the fans as the radio show he was going to be on started at 10 a.m., but in true Ed fashion, he did. Not only did he stop to say hello to us, but he literally stopped to take a photo with every single fan along the barrier.

I stood in the corner (the best spot), as I was able to take photos on my camera as he approached, and then, once he was in the corner, he spent the most time there as there were more fans in the area. 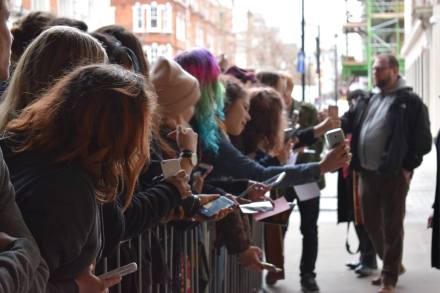 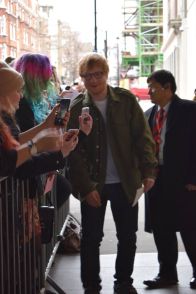 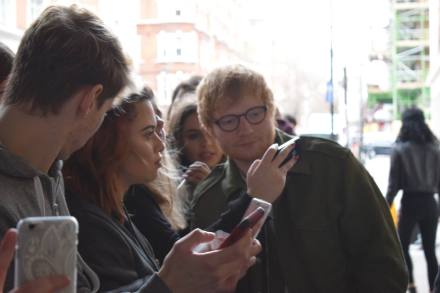 As Ed came closer, I noticed something very odd. When Ed got to an area of fans, everyone went silent and instead only stuck there phones out in his face. Barely anyone actually said hello or talked with him. It was weird.

Once Ed was in the corner, I worked up the courage to say hello. While it wasn’t the longest of conversations or filled with the most content, it is one that I will never forget. It went a little something like this:

(Ed turns and looks at me, I freeze inside, what the heck did I just do???)

Ed: (A small smile spreading on his face) “Aw, thank you!”

(Ed continues to smile, then turns back to take photos. I die inside.)

Then he approached and I handed him my phone to take a photo. It was amazing. 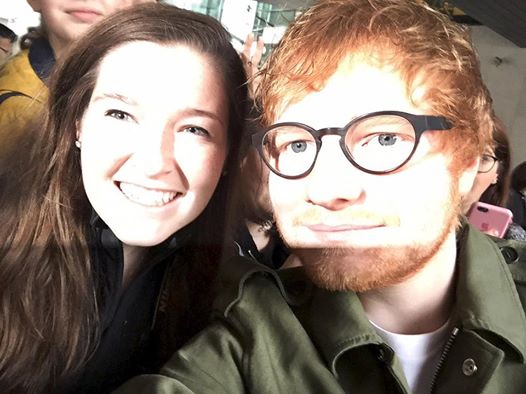 Ed then went inside and was interviewed then performed five songs in the BBC Radio 1 Live Lounge.

I waited outside with a few friends in the off chance that he came back outside to say hello again after. Good thing I did because the BBC Radio 1 doors are a hot-spot for celebrities I guess.

I ended up talking to Jedward, twin brothers from Dublin that are pop-singers (Ed is also obsessed with them). And then Nick Grimshaw, the host of the Radio 1 Breakfast Show, and then Katy Perry also spontaneously came out and talked to the crowd. You could say it was a casual morning. I now know where I will be hanging out on days when I don’t have class…

I still can’t believe this happened and it is most definitely a day I will never forget. 7 years in the making.

I will be traveling on spring break for the next week and a half and will not have my laptop so this will be my last update for a while. You can expect a long blog post about my travels in Europe when I get back!

One thought on “The Day I Met Ed Sheeran”