We arrived in Seattle, Washington at about 5:30 pm Seattle time (so 7:30 pm Wisconsin time). I was amazed by all the mountains we saw from the plane on the way in. The trip from Sea-Tac to our hotel, the Seattle Marriott Waterfront, took about 30 minutes by taxi. Along the way, we passed Centurylink Field and Safeco Field, home to the Mariners, Seattle Seahawks, and Seattle Sounders FC.

After settling in at the hotel, we made our way by foot to the lakefront piers to find dinner and were able to sit outside and watch the sun set. The glare coming off of the water was intense, but it was so cool to watch the ferry boats go back and forth between Seattle’s piers and nearby Bainbridge Island. One of my things to do while we are here is take a ferry to Bainbridge Island and back. The plan is to do so next weekend when we are back in Seattle.

After dinner, it was time to do some exploring. Our hotel is only a few short blocks away from Pike Place Market, and while it was about 8:30 and the market was long closed, we took a walk through anyways. 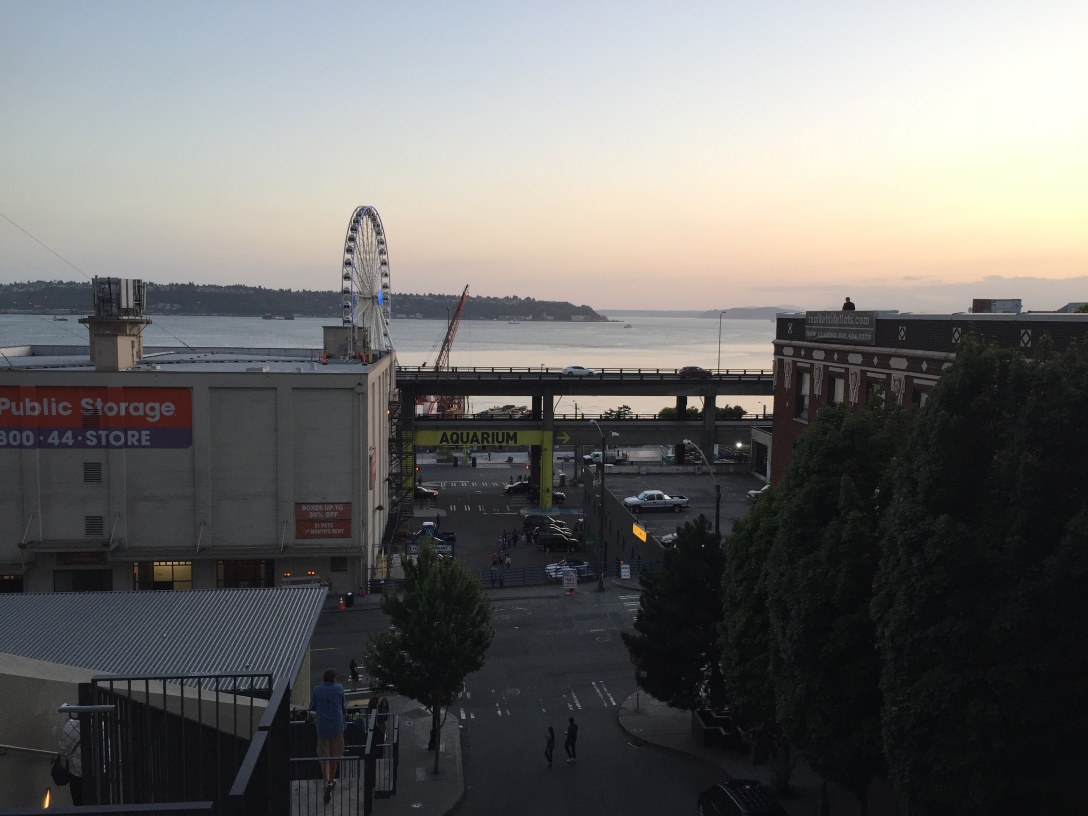 Before coming to Seattle I had no idea how hilly the city really was. To get up to the market from the pier area, you have to climb about a block’s worth of stairs. Kinda crazy, but most definitely worth the climb.

When we reached the top, all of the stalls were empty, but it was fun to walk through the deserted alleyways and corridors. Many other tourists were out doing the same thing. Neon lights lit up the streets and it was a fun, artsy atmosphere to be in.

We were strolling through the cobblestone streets when I turned to my right and realized we had made our way to the “original” Starbucks. I say “original” because the story is that the first Starbucks ever built has since been torn down and this one in Pike Place Market is the next oldest to the original-original and therefore has been given the name the “Original” Starbucks.

Anyways, I had read that the lines are incredibly long during the daytime and go out the door and down the block so many people say to stop for a picture and move on. We happened upon the Starbucks at the perfect time because the line only went to the door on the inside. My aunt is a Starbucks fanatic and requested that we stop to get her a mug while in Seattle so this was the perfect time to stop in.

We waited in line and made our way into the store. Different cups, mugs, and tumblers lined one wall while baristas manned the counter on the other side of the store. Because I love a good tall tumbler for all the water I drink, I decided to buy one. I mean, how could I pass up a tumbler from the original Starbucks? When checking out, I handed over my Starbucks gift card to the barista and he mentioned how cool my Los Angeles gift card was. I told him how I had gotten from Ellen when I attended one of her shows and he proceeded to yell to the barista next to him, “Look how cool this card is! She got it from Ellen when she went to the Ellen show!! I LOVE Ellen! Is it weird that I would marry her if I could? No? I don’t really care anyways if its weird. She should run for president!” This interaction was incredible. The baristas at the “original” Starbucks are hilarious, energetic, and clearly love what they do. This interaction wasn’t the only cool thing to happen while in the store. We also happened to be the last customers let into the store for the night which is kind of awesome to be able to say we closed the “original” Starbucks. 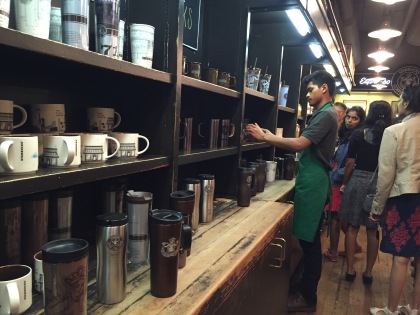 After Starbucks, we continued our walk. We were on a mission to find a small deli or supermarket to buy some water and I wanted to get a few apples for the next few days. We continued to walk along and suddenly saw a large crowd gathered a few streets down as well as the sounds of a marching band playing. I convinced my family to keep on walking so we went to check it out.

It turns out that the Seafair Parade was going on. Crowds of people lined the street taking in the sights and sounds of the parade. Because it was about 9:30 at night, everything was lit up in the parade from the marching bands, to the floats and performers. We stayed to watch for a bit and then went to find a supermarket.

When we arrived back in our room, we found a note and some cookies laid out in front of the TV. Someone had come by to drop off some extra towels and a rollaway bed and had spotted my Wisconsin Badger water bottle in my backpack. They left the cutest little note mentioning seeing the water bottle and saying “Go Badgers!” Needless to say, day one of Seattle was a success!

I can’t wait to see what we get ourselves into tomorrow! I’m not sure what my plan is blog wise, if I will be posting daily during the trip or not, but today was so great that I just had to share what we got up to!